Early Stage Markets — The (Unsurprising) Correlation Between Size and Performance

Anyone who says that size does not hurt investment performance is selling. The highest rates of return I’ve ever achieved were in the 1950s. I killed the Dow. You ought to see the numbers. But I was investing peanuts then. It’s a huge structural advantage not to have a lot of money. — Warren Buffett

At CircleUp we believe early stage financial markets present outsized opportunities to investors. A wealth of empirical research underpins this belief, showing that, across asset classes, returns have historically been greatest at the lower-end of the market.

Nonetheless, the overwhelming majority of investment funds intentionally scale out of the lower-end of the market and into its later stages. Even though later-stage markets are more efficient, more competitive and less alpha-friendly. Why? Quite simply: traditional investment funds, be it private equity or venture capital, are perversely incentivized to grow assets under management to bolster fees. In the language of fees, bigger is unmistakably better.

86% of U.S. businesses with revenues greater than $1M have less than $10M in revenues. An extraordinarily target-rich environment—that the lion’s share of funds size themselves out of. Of the population of active private equity funds in the U.S. only 21% have less than $100M in assets under management—and these funds control less than 1% of available capital according to Preqin data. 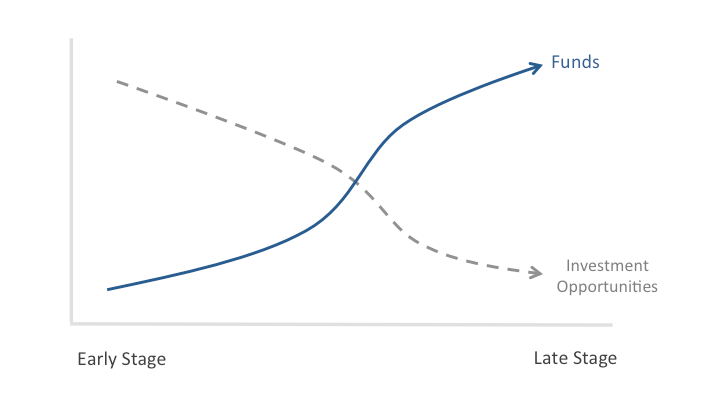 We love this paradox. And we’ve structured our marketplace, and our technology platform, from the ground up to exploit it. Let more investors compete for fewer opportunities in later-stage markets. We call early-stage markets home; where fewer funds have access to more opportunities; and where investors have historically thrived.

Over a 20 year period the Kauffman Foundation invested in 95 venture capital funds. In 2012 it audited its performance and found that no single fund with more than $1BN in AUM exceeded a 2x cash-on-cash return after fees. (PDF: We Have Met the Enemy and He is Us). A clear correlation was observed: as fund sizes increased, returns compressed. 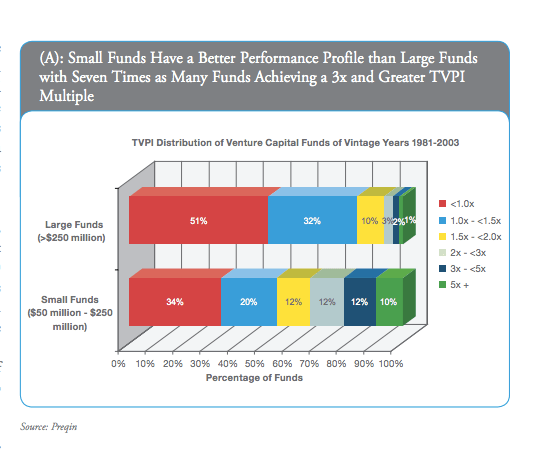 “There are many compelling reasons for the attractiveness of small funds. Managers of such funds often have industry-specific expertise and focus on particular strategies or sectors compared to those of larger funds which usually target multiple stages and sectors.” —Silicon Valley Bank

Moving up into traditional private equity — does the negative correlation between size and performance persist? It does.

In a comprehensive academic study of 7,500 global private equity investments, researchers found that PE suffers from the same diseconomies of scale. Funds were rank-ordered by size and their returns regressed—a fund in the 10th decile being the largest and in the 1st decile, the smallest. Across all metrics—IRR, PME, MIRR, and Median Exit Multiples — they found the same negative relationship between performance and size.

Source: Giants at the Gate: Investment Returns and Diseconomies of Scale in Private Equity.

We’re fascinated by this negative relationship between fund sizes and returns. The question is: does it hold true for CircleUp’s addressable market, consumer private equity?

It does. We developed a unique data set of the consumer PE market over the past twenty years. Using deal level information from over 15 leading consumer early stage and growth capital funds—comprising over 150 individual deals in multiple vintages for each fund manager—we analyzed the relationship between check size and return. (Notes on our methodology in the end notes below). Here are the results.

At the smaller end of the market, investments tend to outperform, on an overall average basis, as seen in the downward sloping red trendline, and the potential for outsized winners. 21% of investments less than $20M had a gross IRR of more than 60%, compared to only 13% of investments greater than $20M.

When the “crowdfunding” revolution started two plus years ago, we couldn’t fully appreciate all the implications. Perhaps the most important one in the long run will be the elimination of perverse incentives in the market—such as the desire to raise larger and larger funds to capture more management fees—that prevent the efficient flow of capital to the most productive uses.

Investors have historically thrived in early-stage markets — markets that we’re thrilled to create access to and call home.

We compiled our consumer return data from public filings, press releases, interviews, reports and in-house research. The return data for specific funds has been intentionally anonymized to protect proprietary data for the funds. To conduct our research we first independently constructed a list of the most relevant firms in the early stage consumer space today. We then reviewed public filings, press releases, documents from several independent sources all with specific knowledge of particular funds and/or firms, and conducted interviews.

The data presented comes from a subset of the firms in the Top 50 consumer focused VC/PE firms from the Preqin Database dated 11/11/14. While not perfect, we believe there are no structural biases in the way the data was gathered that would alter the conclusions presented here.

The Top 50 consumer focused VC/PE firms from the Preqin database are as follow:

Raising Private Equity? Seven Questions To Ask Your Investment Banker Before You Hire Them

What entrepreneur wouldn’t jump at the opportunity to have an investment bank introduce their company to a hundred plus ...
Start Reading
Ryan Caldbeck November.07.2014 9 min read

While Silicon Valley Screams Tech, We Say Consumer. Here’s Why.

“Why are you focusing only on consumer product and retail companies at CircleUp—won’t your investors miss out on the next ...
Start Reading