Is Plant-Based the New Gluten-Free?

Shakespeare first memorialized the question “What’s in a name?” when he wrote Romeo and Juliet in 1594.  Over four-hundred years later and consumers today are asking themselves the related question of “What’s in a product?”  These consumers are thinking less about love with their question and more about health.  Consumers are starting to ask more questions about the food that goes into their bodies and are willing to pay a higher price for healthier products.  In return, consumer brands are thinking about how to best respond to those questions, either by creating new products or repositioning old products with new labels.

There have been surge of healthy foods trends in recent years and an accompanying surge of products and labels that try to tap into those trends. We’ve all seen food that claim to be healthy, fresh, organic, or natural…sometimes all at the same time. Plant-based is the newest addition to these healthy food trends and presents a huge financial opportunity for brands quick enough to understand and tap into it.

It is easier to understand the plant-based movement when considering it alongside another recent trend that proved to be a financial boon for brands: gluten-free. The plant-based and gluten-free trends may at first seem odd to compare. After all, one trend is about eating plants while the other is about avoiding certain plants; nevertheless, the comparison is ultimately helpful as both movements tap into longstanding markets, broadening them beyond their traditional bases.

A Brief History of Gluten-Free

Very few phrases in the food world these days are more polarizing than gluten-free. Long the begrudgingly accepted diet of people with celiac disease, in recent years, gluten-free food has been embraced by millions of Americans who swear by it even though 72% of them don’t have a negative reaction to gluten. Some praise the gluten-free movement as a healthy lifestyle choice while others decry it as a self-indulgent and potentially harmful fad. Those in the former camp argue that gluten-free food is around to stay while those in the latter think it is already seeing its decline. The evidence is mixed. Gluten-free retails sales did see an estimated increase of 6% in 2016, but this is down from an 11% increase in 2015, indicating that growth, while still positive, is slowing down.

Regardless, of your view on the gluten-free movement, it has had a tremendous impact on food brands and presented a major financial opportunity for consumer companies quick enough to capitalize on it. Brands began to create new gluten-free products and it wasn’t long before they also started slapping gluten-free labels on products that were always gluten-free, just to cash in on the trend. The gluten-free market in the United State has been valued at around $1.7 billion just counting traditionally grain-based products that are gluten-free. If you were to include everything with a gluten-free label on it, the market would be much bigger than even that.

While plant-based foods have been around since the dawn of time, the plant-based food trend today, refers to something different than just food that happens to be a plant. In the parlance of modern brands, plant-based products are foods that would typically be made from meat or animal products and are instead made with plant substitutes. Think almond milk instead of cow’s milk, cashew paste instead of cheese, or tofu instead turkey.

Plant-based products are nothing new, but brands proudly describing themselves as plant-based is. Vegan products previously existed in a limbo world where they were made from plants but unwilling to talk about themselves that way. Look at the labeling of something like Boca Burgers over the years and you’ll see them describe themselves as vegan, vegetarian, or meatless, but never plant-based. This positioning may work fine for customers who are specifically looking for vegan food, but often times consumers wanting to purchase plant-based food aren’t vegan or even vegetarians- they’re just looking to cut back a little on animal products. A survey by Mintel found that 31% of consumers occasionally like to have meat-free days, but health reasons were driving that decision making. In fact, some consumers looking for plant-based products may actually be turned off by a vegan or vegetarian labels. The sales of plant-based food and beverages rose 8.1% to $3.1 billion over the past year, but the sales of products with vegetarian or vegan labels flatlined during that same time period.

Brands are beginning to catch on to this. In May 2016, Beyond Meat’s plant-based burger became the first non-meat burger to be sold in the meat section of a grocery store. The burger sold out within an hour of its debut and is now available in more than 3,000 grocery stores nationwide. This is no bait and switch with consumers tricked into buying a veggie burger. Beyond Meat proudly advertises that it is plant-band in bold font on its label. This past summer also saw huge coverage of the Impossible Burger, another meatless burger created in Silicon Valley that advertises itself as plant-based and indistinguishable from beef. Although these companies are two of the most well-known brands in the plant-based movement, they certainly aren’t alone.

We used our machine learning platform Helio to analyze 23,000 different food brands to determine what the main words were that these brands used to describe themselves. There are 267 companies that have “plant-based” as one of their primary attributes. This is still small in the grand scheme of brands and the attribute was used by far fewer brands than something like “gluten-free,” as seen below. Nevertheless, it is still significant given the youth of the trend and the fact that we are just looking at food products here and are not considering the many plant-based beverages on the market.

Most popular words 23,000 food brands use to describe themselves

Unsurprisingly, the general public is also becoming more interested in plant-based products.   As can be seen below, Google searches for “plant based diet” have spiked over the past year while searches for “gluten-free diet” have been on a gradual decline since their height in the beginning of 2012. The massive spike in plant-based searches in July was likely due to the publicity surrounding the Impossible Burger, but even before that spike, the search term was on the rise. 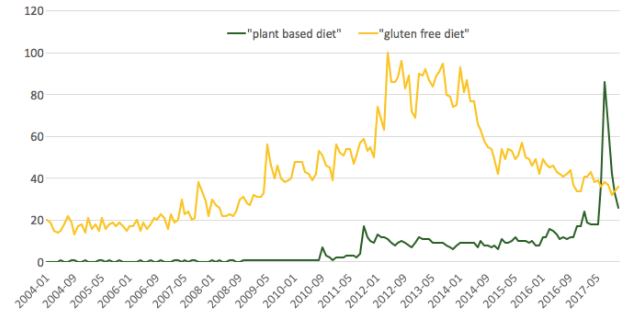 Given the impressive growth of the plant-based movement, it is only fair to ask how long lasting the trend will be. Will plant-based products maintain their double-digit sales growth or will or customers grow weary of plant-based labels as they grew weary of gluten-free labels and slow their purchasing of the products?

I think the plant-based movement will parallel the gluten-free movements in a few important aspects.

2)    Brands will begin to put plant-based labels on products that were always plant-based. This will largely consist of vegan and vegetarian products relabeling themselves as plant-based.

The one important area where I think these trends diverge is consumer sentiment.  Even with brands relabeling products that were always plant-based with plant-based labels, I don’t think we’ll see the negative reaction from many customers that we saw with the gluten-free movement.  After all, there are some legitimate health concerns associated with adopting a gluten-free diet without consulting a doctor.  While it is important to still get certain nutrients from your food, people have survived on plant-based diets long before there were even doctors and cutting out meat can actually be good for your health provided you get certain nutrients from elsewhere.

While consumers are embracing the plant-based movement, industry players already are reacting more warily. Incumbents recognize that plant-based products are cutting into their market share and are fighting back. Members of the dairy community have been trying to pass the Dairy Pride Act which would forbid plant-based products from using terms like “milk” or “cheese” on their labels. Time will tell whether lobbyists for meat companies will try similar tactics to keep plant-based meats from being described in meat like terms or sold in the meat sections of stores.

In the meantime, expect to see more plant-based products on your store shelves, more plant-based stickers placed on products that always were plants, and more plant based news about burgers that you just can’t believe aren’t beef.

A version of this post first appeared in FoodNavigator.

The views and opinions expressed in this post are not necessarily those of CircleUp or its affiliates.  Data from Helio is for illustrative purposes only.  It is not meant as an indicator of future company performance or as a measure of suitability for investment.

Big consumer companies are slow to adapt to changing consumer tastes because they spend so little on researching what those ...
Start Reading
CircleUp April.20.2017 1 min read

Using Shipping to Strengthen Your Business

There’s no question that distribution is the lifeblood of any CPG business and shipping optimization is a key input in ...
Start Reading