When it comes to food and nutrition, there are some ideas that we’ve accepted as common sense: Water is good. MSG is probably bad. Sodium in general isn’t great, but sea salt is a plus. Garlic is tasty. And what the heck is lecithin?

But psychologically believing something is one thing; what people actually do is another thing altogether. And this is perhaps most true when it comes to the foods and beverages we buy and consume.

Using CircleUp’s data science platform Helio, we’ve been performing analyses across a variety of consumer food and beverage brands to see how individual ingredients tend to perform in particular categories, and how they may ultimately be to linked to a product’s popularity. For the purposes of this post, we decided to run a quick query to see what are some of the most seemingly impactful ingredients, and whether they appear to have a positive or negative correlation with consumer sentiment (gleaned from product reviews and other sources.)

What we’ve found is far from conclusive, but it is pretty interesting, so we’d thought we’d share a few insights here.

As always, bear in mind that this data, like the consumer products industry overall, is a living and constantly changing thing. We certainly don’t claim that any of this is definitive proof that any ingredient can make or break a product. It’s just a fun example of what Helio can do. 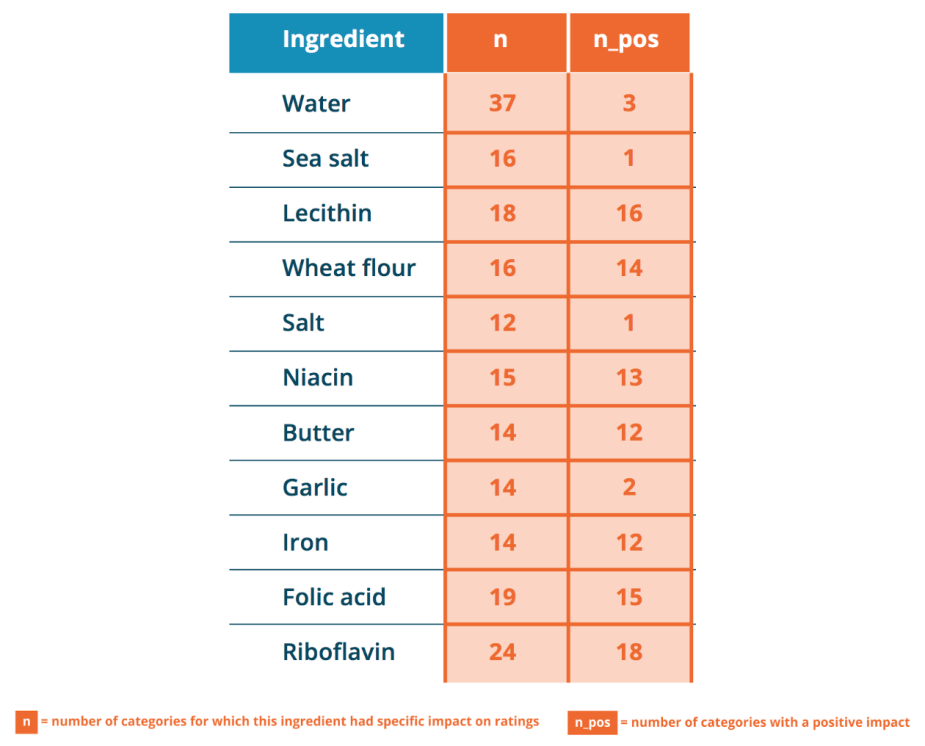 Water: We all know that water is an ideal beverage to drink for health. But when it’s included as an ingredient in a consumer packaged good, its impact is not always a positive one. In fact, in 92% of categories we analyzed, products that include water as an ingredient were rated lower on average than products without water. Perhaps this is not completely surprising when you consider the fact that water tends to, well, water things down?

Sea salt: While sea salt has been the ingredient du jour for several years now, products with sea salt are not often more likable than products without. The effect of including of sea salt is linked to higher consumer ratings just 6% of the time in our analysis.

Butter: Though butter has not always had the best reputation when it comes to health, foods that include it as an ingredient seem to be quite popular. In the sample of products we looked at, Helio shows that 85% of the time products with butter have higher average ratings than products without. And aside from being tasty, lately butter has been shedding the stigma it’s had in the past. Certain healthy living advocates have embraced butter in recent years: Grassfed butter is the cornerstone of the super trendy Bulletproof Coffee, for example.

Garlic: Garlic can be a tricky ingredient. Many people find it delicious, but many people also try to avoid having too much of it, due to its tendency to stick around as a scent. Helio’s data reflects that tension: Products with garlic as an ingredient were rated lower on average in 14 out of 16 categories we sampled.

Lecithin: A great example of a strong but silent type, lecithin is an ingredient that most people don’t purposefully seek out — but they seem to be happy when it’s there. When added to food products, lecithin wears many hats: It acts as an emulsifier, makes products smoother, prevents separation, and ensures an equal distribution of flavor and texture, among other things. According to our sample, products with lecithin were rated higher on average for 89% of the product categories we evaluated.

Niacin: Another somewhat mysterious ingredient with a seemingly positive impact on food and beverage ratings, products that include Niacin were rated higher on average in 86% of the product categories we surveyed. Niacin is an essential human nutrient that’s added as a supplement to a number of processed and fortified foods such as breakfast cereals — so it could just be that Niacin is often added to foods that people tend to find appealing, in a classic case of correlation instead of causation.

A note on methodology:

The methodology we used in this analysis was fairly simple. Helio aggregates data on hundreds of thousands of products, many of which are associated with user-generated ratings and reviews, sometimes from multiple sources. To understand the association between specific ingredients and product satisfaction, we compared for each category (popcorns, cereal bars, etc…) the reviews for products with vs. without a given ingredient. Reviews were standardized per source and then aggregated.

We only considered ingredients that were present in between 10% and 90% of products for a given category — the idea was to exclude ingredients that were either extremely rare or extremely common. We also restricted the categories to only those where an ingredient had a statistically significant relationship (either positive or negative) on the ratings.We then found the percent of such categories where inclusion of the ingredient was associated with higher ratings; e.g., as mentioned above, 73% for water and 85% for butter. We sorted by the largest effects (highest and lowest percentages) and picked the interesting ones to share with you.

In a world that’s becoming increasingly health conscious, it can still be surprisingly difficult to know the ingredients in the ...
Start Reading
CircleUp February.20.2018 7 min read

Consumers Read Product Labels…Investors Should Too

The Helio Insights series uses our machine learning platform Helio to shine a spotlight on interesting products and brands in ...
Start Reading