Boost the Sales of Your Brand with Growth Analytics

Big consumer goods companies like Unilever and Nestle understand how to use sales data to get more shelf space (which in turn gets them more sales, thus better performance data). Small, growing consumer goods brands rarely tell their own stories using data, which makes it hard to truly break through the clutter and grow.

Growth Analytics tell the story of your performance to a retail buyer using many different metrics, but all toward the aim of convincing the retailer that you will help their aisle sell more. Some key areas include:

A growing brand probably won’t outsell the largest products in the retail set. But, different data cuts can showcase your performance in the best light. Consider all the possible ways to look at the data – which include

Retail buyers care about how much their aisle will sell in total and much less about whether they sell your brand or your competitors’. You want to show them that you won’t just steal market share from other brands they happen to carry, but that you will help them sell more overall.

Buyers have a fixed amount of space to place products. If you can do ‘more with less’, you can make a data-driven argument for better or more space for your product. If a brand earns an additional ‘facing’ (i.e., an extra spot for the same product), sales could increase, potentially by as much as 20%. That sales performance boost will help you get into other retailers and make the case for more space there as well!

Many companies like Nielsen or IRI can provide you with household pantry (“panel”) data that can show your impact on shoppers. Perhaps you sell very well with the demographic a buyer cares most about, or you can prove that your brand is the strongest at convincing people to start buying that type of product again.

NatureFizzPop is a zero calorie beverage with natural sweetener. It launched two years ago and has grown steadily, although not as quickly as the founder had hoped. In the past, the CEO would show up to meetings well prepared to talk about the mission and product, but something was missing. Now, before the next meeting with the buyer at their largest account, the CEO invested in a data based story centered around the following:

NatureFizzPop’s CEO was at first discouraged to see that at this retailer, her product ranked 10th in total sales over the past year. However, sharpening the data allowed her to change the narrative:

NatureFizzPop had achieved 15% market share within the comparison set. While this alone is quite impressive, it was able to show that the set sold 5% more in the geographies where they were sold, and 10% in the West where they had additional shelf space, while the stores where they weren’t carried didn’t show any growth at all. This tied into their argument that they brought new consumers into the aisle who are excited about their new beverage even if they don’t typically buy soft drinks. 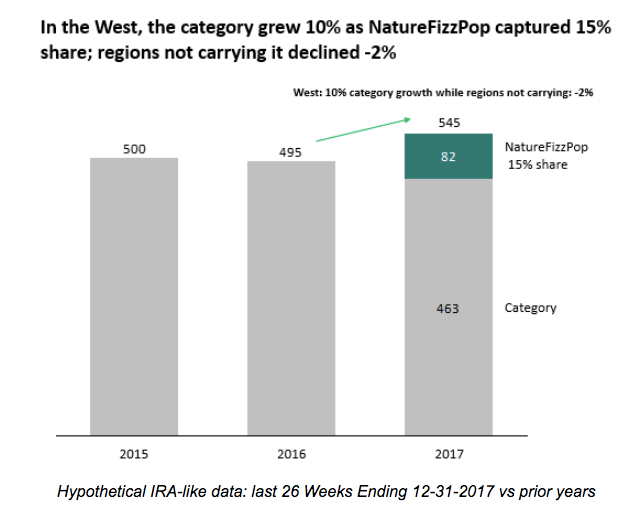 The data showed that NatureFizzPop’s top performing product with just one “facing” (or shelf space) outsold some of the older brands that had 2 and 3 facings. Using a few assumptions, NatureFizzPop was able to estimate the potential increase in total aisle sales the retailer would enjoy by taking away a space from a competitor and giving it to NatureFizzPop.

The Case To Make

Using the above data, NatureFizzPop makes the case that they bring new customers into the aisle and expand sales for an entire set. They argue that they are more productive with facings than many other products in the set and will earn more in total sales for retailers where they have additional shelf space. They back up this claim with their space productivity analysis and the data around the increase in sales they bring for the entire set on the West Coast.

This is one example of how your brand can think about using different slices of data to make a compelling argument to win more shelf space from retailers.

The world of consumer goods is changing at a breakneck speed. This isn’t a shocking revelation to anyone who’s worked in or ...
Start Reading
CircleUp October.31.2018 7 min read