Artis Coffee is raising capital from qualified accredited investors to fund their expansion on CircleUp. Interested investors can sign up here to view their offering.

It’s hard to introduce Artís without giving away the punchline, so here it is: They roast your beans in front of you to your preference. And if you don’t yet know your preference, they’ll help you get started. “We want to create the fourth wave of coffee,” says Alex Lowe the company’s CEO and one of its three co-founders.

Among coffee enthusiasts the term “third-wave coffee” has come to signify quality beans (usually) lightly roasted in small batches within a few days of brewing. The first wave of coffee hit in 1900, when Hills Bros. began vacuum sealing coffee, and Americans could suddenly pick up a can of grounds at their local supermarket. The second wave is a bit harder to pinpoint, but it is usually considered to be the moment espresso drinks were available on every corner. Starbucks is widely referred to as the company that almost single-handedly ushered in the second wave.

They opened the first store in 1971 and started expanding in the mid 80s. Third wave coffee only picked up steam in the last half decade or so, as small roasters—like Stumptown, Blue Bottle, Intellgentsia, and others—began serving urban dwellers the rich, complex beverage in the signature third-wave style.

Lowe thinks the third wave is bound to be short-lived, though. “I tend to think that the third wave is inherently self limiting, because those championing this form of coffee consumption are often hyper focused on making every aspect of the coffee perfect, it’s unapproachable to a lot of people.” Aloof staff members, lots of coffee jargon, and a glut of information about the coffee’s origin or tasting notes can overwhelm many potential customers and send them running back to big chain stores where the coffee may over-roasted and several weeks old, but at least the menus are understandable and the customer service is consistent.

Artís aims to change all that. “We think that there’s this market of people ready to leave Starbucks, but not eager to walk into a Stumptown or Blue Bottle,” Lowe says. 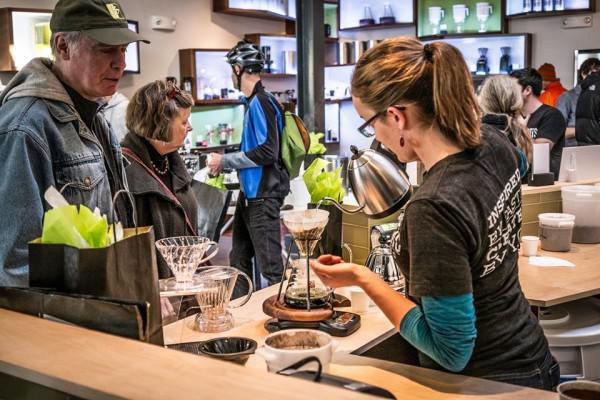 How did you come up with the idea of Artís?

I was a lieutenant in the Navy. And I spent the first two and a half years in Japan, stationed just south of Tokyo. Japan is the most clean, organized, safe society. Quality and freshness is the crux of every part of life. Coffee is relatively new in Japan—it’s really only been popular for the last decade or so. But they kind of leap-frogged us in terms of the quality and freshness. I would go to this little place near my house—it was definitely a coffee shop, but it also had a lot of brewing equipment and they had big bins of green coffee beans on display. There was a map telling you where the beans were from. You would choose your beans, they would ask you how you wanted them roasted, and they would roast them right in front of you. You’d walk out with this warm bag of fresh coffee.

And they were using good beans?

Yeah. High quality coffee. I got my coffee roasted there every week. The first time you have freshly roasted coffee, the flavor difference will blow your mind. Really coffee only lasts about ten days to two weeks after you roast it and it’s a really delicate product. The oils and things that give it its flavor are really volatile, and most Americans are basically just drinking stale coffee but they don’t know it. People assume that that bitterness you’re tasting is just the taste of coffee, but it’s not. Fresh coffee is completely different.

How did you validate Artís?

I continued in the Navy for another five years but I had this idea in the back of my mind. Just seeing the green coffee roasted right in front of the customer. I ended up leaving the Navy after seven years, in January of 2012 and started Babson College’s MBA program in the Fall. My roommate was my co-founder (James Gutierrez). He studied architecture as an undergrad, worked in retail design for a couple years, and then moved into a retail construction rollout. So he built like four or five hundred retail stores for top brands. I told him about my idea and he said, “That’s a cool idea, let me throw a store around it.”

He put up whiteboards in our living room and started sketching the idea out. We validated in school, as a part of a feasibility study with my group. Our biggest question was: is the market big enough? And, is the market changing? The answer to both were, yes. And that’s kind of where the whole thing sparked up.

And how did you find Elvis?

We entered a national business competition focussed on innovative retail concepts. We ended up bringing Elvis on board for this competition. He’d worked at Equal Exchange in Boston. They’re the largest importer of fair trade coffee in the country. So he knew coffee from the sourcing it to roasting to grinding to brewing. He even worked in cafes and everything and saw the whole coffee lifecycle. We ended up winning the local, and then winning the regional, and then all of a sudden we’re at this national competition. It was in the Gansevoort Hotel, on the top floor, with these executives of billion dollar companies. We’re pitching this idea and we’re not even done with our first year of business school.

How did it go?

So, we won. And got some seed money, too. About $13,000—which isn’t enough to build a retail store, but it’s enough to get you incorporated and just gives you some impetus. The biggest thing we got from the competition were a few advisors, including one of the guys who started Così. We said to him, “Hey, we should start this when we get out of school.” And he said, “How about the fourth quarter of this year?” This is in February. So we took his challenge, and moved to San Francisco in May of that same year. We raised $800,000, got a commercial lease on a hot street, and opened in December of that year. From a Power Point to a retail store in eight months. And that was only possible because of the team. When you have three people with different backgrounds sharing the work, you can move fast. And of course the advisory team around you is key too.

How do you divvy up the work between three cofounders? That sounds like it could get complicated.

It actually works really well. We created an organization chart for the company we want to become. James is store development. He does all the maintenance he does all the design work, all the graphic design and everything. He also knows retail construction roll out. So, he knows how to build a store in a way that can become scalable and cost effective. Elvis is marketing but also knows coffee from start to finish. He’s technically the chief marketing officer, but he really has his hands in everything in the retail store and the coffee, specifically.

I do administrative stuff, fundraising—which is often 80 percent of my time. And then investor relations and just overall leadership of the team. Making sure we’re all going toward the same mission. I don’t have specific expertise in anything we’re doing except leadership and management of people, which is what I did in the Navy. The Navy is interesting. You graduate from college—I did ROTC, where you do a lot of leadership training. But the first day you walk on a ship you’re the leader of 15 sailors, with about 300 years of experience combined, and it’s your first day in the Navy. So it’s about bringing people and resources together for a mission, which translates well to this. 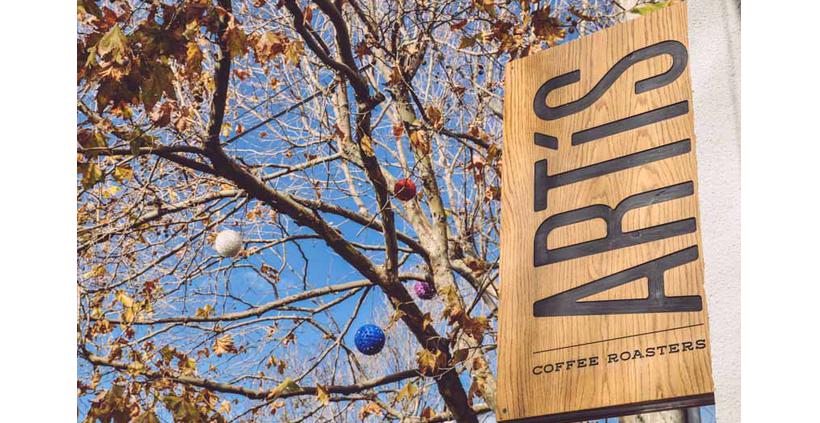 What factors have played into your pricing? I see that your coffee costs less per ounce than a lot of the popular third wave roasters.

We definitely have a premium over Peet’s and Starbucks. Our pricing is based on the cost, but also positioning ourselves as a better product, a fresher product. But, yes, we’re competitive with a lot of the well known brands, like Blue Bottle, and Stumptown—we sell a pound for the same price as one of their 12 ounce bags. We want to set the standards and create the fourth wave. Bring fresh, high-quality coffee to the masses in an approachable, unintimidating way.

Did I see somewhere that you’re opening somewhere in Thailand?

Yeah it’s built, staffed, hired, and trained! It’s opening on the 20th of February. Though, it’s actually a brand lease, so it’s one of our partners opening our concept. They’re running it, but it’s an Artís store with the same customer experience.

How did that come about?

He re-designed the roaster we use, upgraded it. He came out to see our concept, immediately fell in love with it, and asked, “Can I open one up in Bangkok?” He runs a five star resort and in Puket and 15 restaurants, so we trusted that he could do it well. probably better than we can right now. 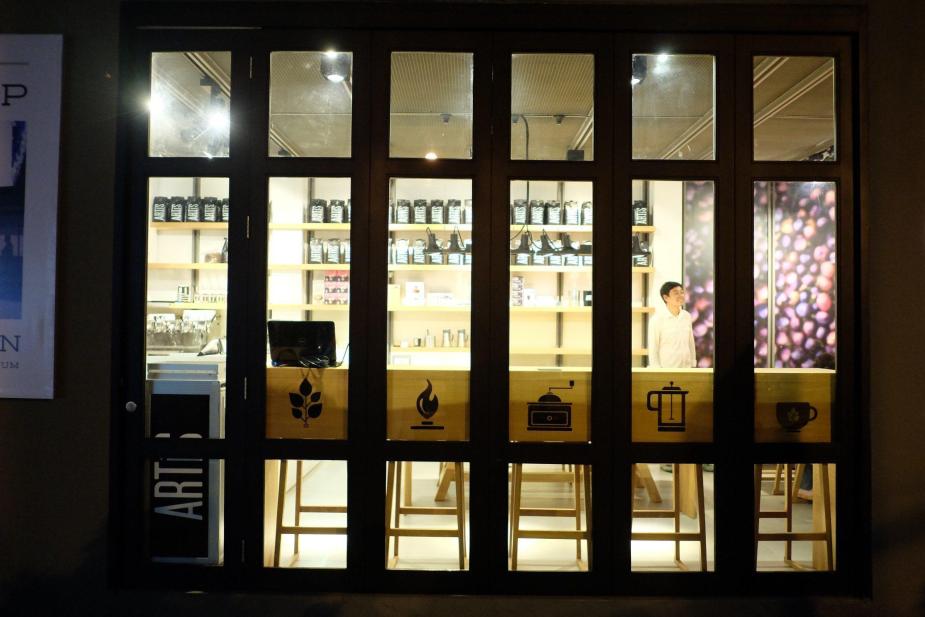 Are you looking to expand to other locations in the states?

Yes. We have three more planned in 2015. We start construction next week on the first.

Do you guys spend time behind the counter, roasting beans?

At the beginning, yes. That’s how we were profitable the first day. And it’s just so important to build culture and set standards with the founders on the floor. So we worked forty hours each on the floor for the first few months. And then kind of stepped it off to the point where we didn’t work a minute on the floor during the Christmas season and our sales blew all projections away. At the moment our offices are in the back, but we’re about to move to a corporate office. Give the employees some space, really get out of their hair.

Thanks for your time, Alex! Artis Coffee is raising capital from qualified accredited investors to fund their expansion on CircleUp. Interested investors can sign up to learn more here.

3 Consumer and Retail Trends to Watch in 2015

At CircleUp we’re fortunate to sit at the intersection of private equity investing and data. This provides us with ...
Start Reading
CircleUp December.04.2014 < 1 min read

Inside the Minds of Angel Investors