Junior Explorers: The Educational Startup Aiming To Take Over The Kids Market And Inspire a Generation

Educational games are notoriously bad. With the exception of a handful of gems — shoutout to the legendary Oregon Trail — they’re almost universally boring, prescriptive, and not actually that great at teaching kids much of anything. The problem isn’t that kids don’t want to learn (learning is what their brains are built to do, they can’t help it) or that they have no attention spans, the problem, says Anurag Agarwal, Founder and CEO of Junior Explorers, is that the games aren’t actually built for kids. Not for the way kids actually think and engage with their world, anyway.

Yet despite everything that’s working against the educational gaming industry, the market is huge and only expected to grow. Agarwal, a business veteran and former Professor of Entrepreneurship at Boston University, founded this company, with a very specific mission: to inspire a new generation of environmental stewards—and do it in a way that let’s kids be kids and fall in love with nature and wildlife. 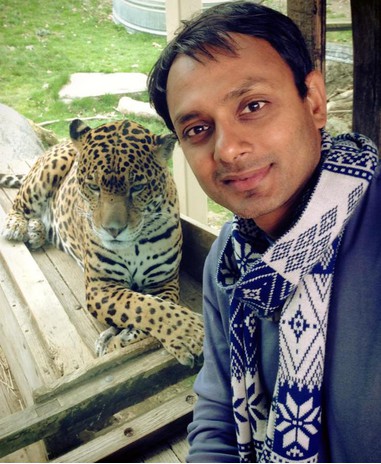 “Everybody is talking about the planet,” he says. “But nobody seems to be talking to the generation that’s going to be the most impacted. The Pope himself speaking on climate change recently asked this question:’What kind of world do we want to leave to those who come after us, to children who are now growing up?’ “In order to effectively reach kids, though, he knew he would have to come at it from a different angle than everyone else has tried, to meet kids where they already are. And it turns out that’s wherever the animals are.

“We’re still looking for the first kid who doesn’t like animals,” Agarwal jokes. “They have a natural affinity towards nature and wildlife.” In fact, he says, U.S. zoos and aquariums see 200 million visitors a year. At about $15 per ticket, it’s clear that parents are spending billions of dollars to expose their kids to the natural world and get them outdoors.

Here’s how it work. Every month subscribers receive a small collection of themed stickers, maps, puzzles, temporary tattoos, small toys, wristbands, postcards, and trading cards through the mail — but that’s only the beginning. These items are all carefully created to clue kids into the environment they’re studying (e.g. the Amazon, the Serengeti, the Everglades) so that once they go online they already have a jumpstart on the new location. The mission then continues online where the digital experience takes kids on a monthly adventure where they solve a mystery in nature with mini games interspersed to keep engagement high; players learn about deforestation as they track down a missing jaguar, and get a front row seat to the complex chain of consequences from climate change when solving the mystery of bleached coral. 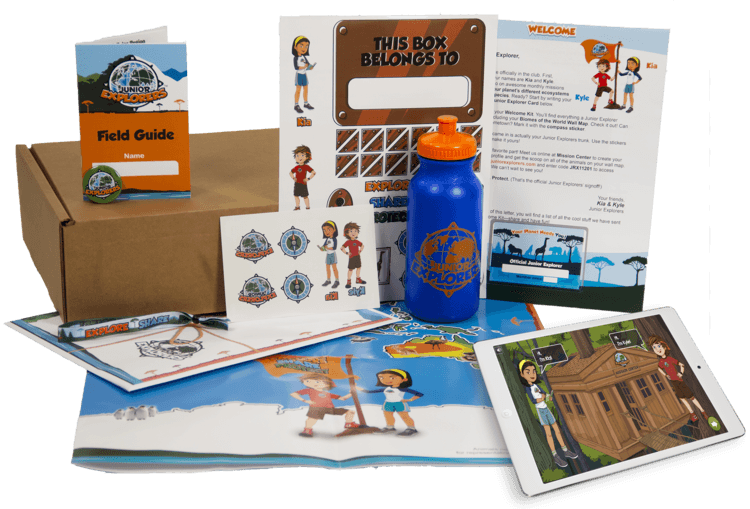 Junior Explorers is a fascinating chimera in almost every aspect. It’s digital and it’s tactile, playful with a serious (and educational) message, altruistic in mission yet a for-profit business. But the company manages to pull off this seemingly contradictory balance with poise. Before hopping on a plane to start the 500 Startups accelerator program, Agarwal was eager to talk to us about education, gaming, subscription boxes, and the company’s ambitious plans for the future.

How did you decide on this subscription box setup?

We knew that to solve a problem and create a solution you have to first understand the audience and the community for whom you’re creating the solution. All kids love animals, but kids also love stories and storytelling. They like characters. And they’re tactile but they’re digital at the same time. They like to collect things and they like to share things, right? I mean, that’s the persona of a child today. So we took all of that and combined it to create fun, interactive learning experiences that inspire them to be environmental stewards.

How did you decide that this hybrid game/subscription box was the best product for this audience?

Once we established the problem and found the solution that we wanted to create, we then went about looking at what is already available to kids today. What is working, what is not working. And when we started looking at the marketplace we realized that this is a massive consumer market. There is already a huge willingness for parents to spend money on products that are fun and provide learning for their kids and every parent we spoke to acknowledges the need today, to teach kids about nature and wildlife. So all we had to do was feed that demand, but feed it with a mission and with a focus on the learning aspect of it, so that it’s just not a toy. 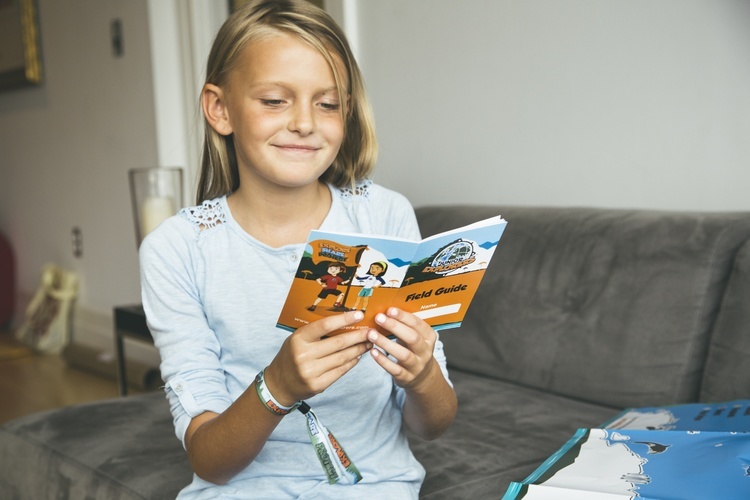 Why a subscription service?

Subscription is really only a piece of this. We’re interested in creating learning experiences for kids, it’s just that the first experience we’re delivering is through the subscription model. Because we own the content, the characters and all the intellectual property. We’re starting with a subscription because it’s the best way to build a continued dialog, build a community, and also it’s a very profitable business model.

The paradigm of learning and experience, from a content point of view, has now pretty much gone digital. There is no going backward in terms of technology — kids will only continue to get smarter and more savvy. So we use that to create a very experiential way for kids to explore different habitats and ecosystems every month to solve mysteries and learn about the species that live there. Therefore, be connected to these environments. As a Junior Explorer you are a part of this elite, global club that empowers you to act on behalf of the planet. And at the end of the game kids can convert the points they earned to donate a real $1 to a conservation organization of their choice. So it’s immersive, it’s actionable.

Why aren’t there are more educational subscriptions for kids?

Because people just aren’t thinking about it. That’s why it’s so exciting for us. In the subscription world there are two kinds of subscription companies: First, there are product based companies, the Birchboxes of the world. They put stuff in a box, they send it to you. But there’s no experience beyond getting the box. The other kind is a digital subscription. You pay a certain amount of money for access to digital content, like games. The truth is these are both very successful models because there are so many people willing to subscribe to them. We know competitors in our space who have hundreds of thousands of subscribers. What makes Junior Explorers different is that we are not focused on the subscription model as much as we are focused on our mission. We have to get kids to love the natural world because in order to protect something you have to love it. In order to love it, you have to understand it. We’re doing the education and awareness to create the understanding that will foster love, which will then inspire protection. Its a new parenting value and we are offering parents a unique solution to get their kids involved. 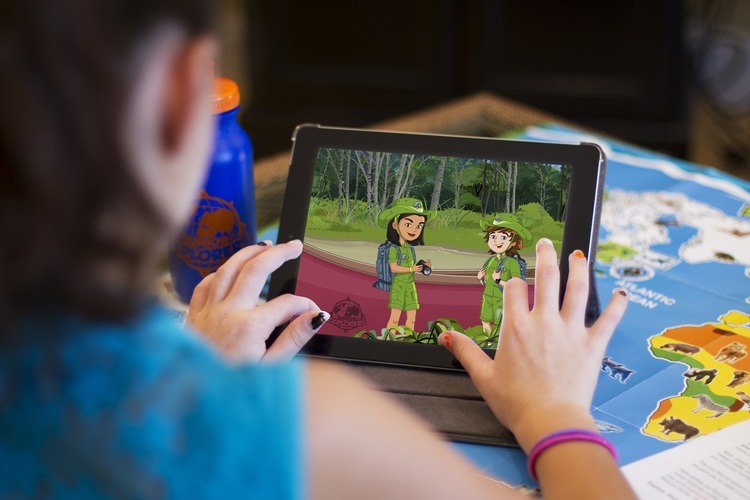 Is there anything about your approach to Junior Explorers that you’d change if you could do it over again?

We’re always adapting very fast. For instance, we didn’t start with voiceovers (we just had animation and text) because we were told over and over again that kids need to read more. That’s what the parents and teachers wanted, right? But it turns out that’s not what the kids wanted, so we had to go back and put voiceovers in. And that spiked engagement. There cannot be learning without fun for the kids was our simple take away there.

We launched in Singapore in July and we’re launching in Brazil in August, so we are building a global company. For one, we’re planning to build physical-only products and explore retail and merchandising. The goal will be to create eco-products that kids can use so they continue to participate in the stewardship of the planet. And then we’ll be creating digital-only products too. We have a partnership with a company called Kurio — they have two million tablets in the US and they want to put a Junior Explorers app on their tablets. And eventually, we’re building this story so that every mission can be an episode of a TV series. The long term plan of the company is to become a platform that creates physical to digital experiences that we deliver across various mediums — subscription is just the first piece of it.

Yogurt may have originated as a way of preserving milk, but today its appeal is about fast, easy nutrition. Packed with protein ...
Start Reading
CircleUp March.16.2015 4 min read

The Tax Advantages of Investing in Private Equity with your IRA